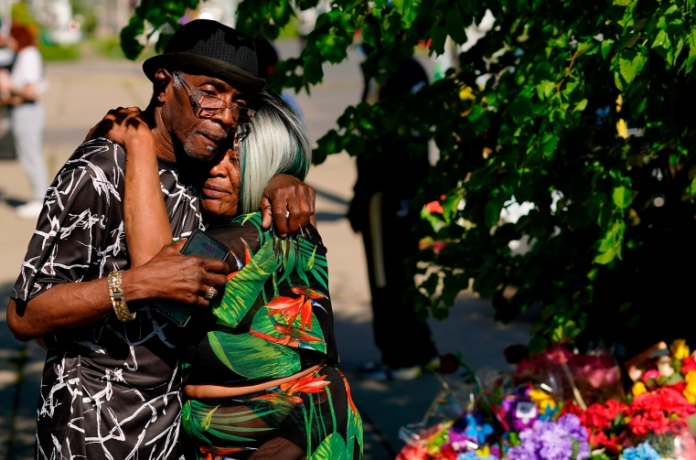 (Al Jazeera) United Nations Secretary-General Antonio Guterres said he was “appalled” by the killing of 10 people in a grocery shop in a Black neighbourhood in Buffalo, New York, calling it “a vile act of racist violent extremism”.

The comments on Monday, released by a UN spokesman, came two days after a white gunman clad in tactical body armour shot four people in the parking lot of the Tops Friendly Market with an assault rifle before entering the store and shooting dead nine others. Authorities were investigating the attack as a racially motivated hate crime.

In the statement, Guterres extended “his deepest condolences to the families and loved ones of the victims”.

He added he “hopes justice will be served swiftly”.

She paid tribute to the victims, who included shoppers and shop staff, describing an elderly woman who planted trees on her block, and a woman who was food shopping after visiting her husband in a nursing home.

Among those killed was a retired police officer working as a security guard who fired several shots at the assailant before being shot himself.

“I held in my arms a young lady who worked at Tops, who was so afraid that she was about to die, who witnessed the bloodshed, who shaked (sic) and quivered in my arms, who is afraid for her community, afraid also for herself,” James said.

Later in the day, Buffalo Police Commissioner Joseph Gramaglia told reporters the 18-year-old suspect, identified as Payton Gendron, did “reconnaissance” on the predominantly Black area surrounding the market a day before the attack. He said evidence recovered so far “makes no mistake that this is an absolute racist hate crime”.

Gendron was arraigned late Saturday on a single count of first-degree murder. Federal authorities have said an investigation into the killings as “a hate crime and an act of racially motivated violent extremism” was continuing, with more charges expected.

Links to white supremacy
The attack has shone a light on white supremacy in the US and its web of associated conspiracy theories that proliferate online. In April of last year, President Joe Biden called white supremacist attacks the “most lethal terrorist threat” to the US in recent years.

Law enforcement officials have told reporters that preliminary investigations showed Gendron had visited sites espousing white supremacist ideology and race-based conspiracy theories, and extensively researched the 2019 mosque shootings in Christchurch, New Zealand and the man who killed dozens at a summer camp in Norway in 2011.

A manifesto believed to be authored by Gendron espoused the “Great Replacement Theory”, a racist conspiracy that says white people are being replaced by racial minorities in the US and Europe.

Saturday’s attack was not the gunman’s first contact with authorities.

On Sunday, Governor Hochul noted while the AR-15 the gunman used was legally purchased in New York, which has some of the strictest gun laws in the country, the high-capacity magazine in the weapon had been outlawed in the state.

“We need a national response,” she told NBC News. “We need other states to step up. We need the federal government on our side.”