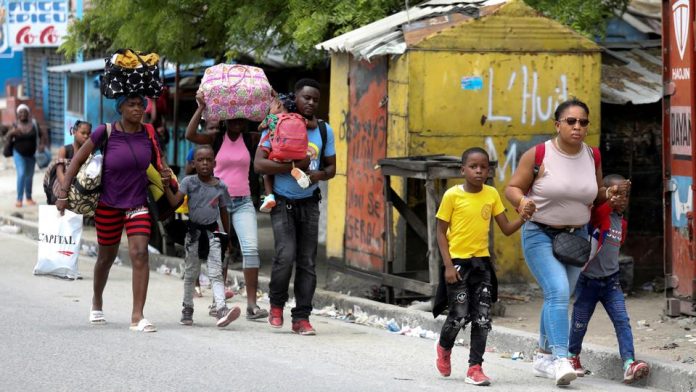 UNITED NATIONS (CMC) – The United Nations says clashes in Haiti between rival gangs in the capital, Port-au-Prince, have forced hundreds of people to flee their homes in the French-speaking Caricom country.

UN deputy spokesperson, Farhan Haq quoting the UN Humanitarian Affairs Office (OCHA) in Haiti, said unrest has been growing between gang members in the neighbourhoods of the commune of Croix-des-Bouquets, Cité Soleil, Bas Delmas and Martissant.

“According to our humanitarian colleagues, violence in the commune of Croix-des-Bouquets has displaced more than 1,200 people. At least 26 civilians have been killed and 22 injured, although these figures are probably higher.”

At the same time, he said dozens of houses have been burned; schools, medical centres and markets have had to close; and a hospital in Marin was looted.

The UN said while it is working on a plan to relocate families being housed on temporary sites, the UN said it has been collaborating with its humanitarian partners in supporting the Mayor’s Office of Tabarre and the Civil Protection Agency in distributing hot meals and food, as well as essential items.

Since the assassination last July of President Jovenel Moïse, violent crime has been on the rise, according to reports.

The UN noted that, last month, thousands took to the streets, demanding that the late president’s successor, Ariel Henry, do more to combat Haiti’s powerful criminal gangs, “which have taken control of parts of the capital.”

Meanwhile, as the Haitian police struggle to contain the gang violence, kidnappings of foreigners and others by criminal gangs, demanding large ransoms, have been on the rise, according to reports.

According to Haiti’s Centre for Analysis and Research on Human Rights, in 2021, more than 1,200 people were kidnapped – only 81 of whom were foreign nationals.

Ten per cent were so-called “collective abductions,” where gang members abducted a group of people, sometimes by storming church services and kidnapping clergy in the middle of mass, the UN said.