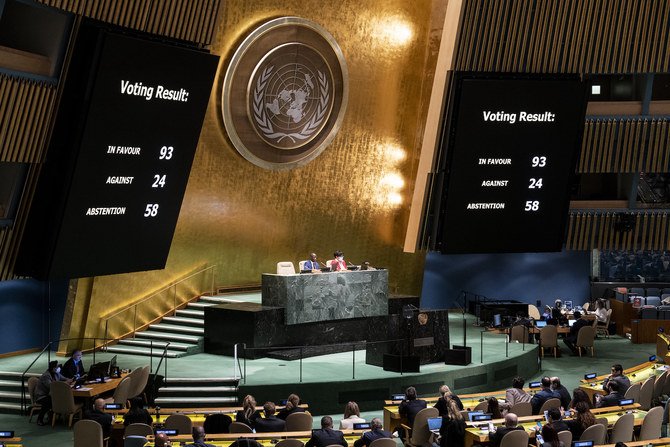 St. Kitts and Nevis (WINN): The United Nations General Assembly voted to suspend Russia from the UN Human Rights Council on Thursday (April 7) in light of what the UN described as war crimes in Ukraine with the deaths of its citizens.

Russia has continually said that it is not targeting residential areas or civilians of Ukraine, and US Ambassador Linda Thomas-Greenfield called for the country’s expulsion from the body on Monday (April 4).

The US Ambassador called Russia’s participation a “farce” after videos and photos from the town near Kyiv showed dead bodies of what appeared to be civilians.

In several international media reports and correspondent reports, attacks on residential areas, civilians and the displacement of millions of Ukrainians have been a significant casualty of Russia’s move to rid Ukraine of what Moscow believes is a significant nazi influence in President Volodymyr Zelenskyy’s government.

The motion to suspend Russia yielded the following results; 93 in favour, 24 against and 58 abstentions.

Among those that abstained were several Caribbean Islands; Barbados, Guyana, St. Kitts and Nevis, St. Vincent and the Grenadines and Trinidad and Tobago. 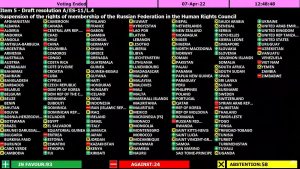 Prime Minister of Barbados, Mia Mottley, expects a more difficult time ahead for the region due to the war in Ukraine.

“The truth is that with the war in Ukraine now going into its fifth or so week, we are now going to start to see; regrettably, some of the consequences of that war which have been spoken about; that is going to lead to discomfort in many of our countries with respect to prices and with respect to access to those commodities, “Mottley said during the opening of the Caribbean Nations Security Conference 2022 (CANSEC 22) in Barbados.

“It is going to lead, therefore, to the potential risk of us having to be able to settle our populations and to get them to understand that the world is going through a difficult moment, but it is not the first time it has gone through it, and it will regrettably not be the last time because of the nature of just human civilisation and our natural made environment.”

In light of the human rights concern present in Ukraine, the ban on travel to and from Russia by several countries, the trickle-down effect of the conflict, which includes the increase of gas prices since the prohibition of Russian fuel in the US and Russia demanding payment for gas in Rubles from countries in the European Union still purchasing its natural gas to the direct and indirect increase in the cost of goods and services, why did St. Kitts and Nevis abstain?

“We had a discussion among the CARICOM Foreign Ministers about the matter, and we reflected that CARICOM had made a very strong statement already as CARICOM, condemning the Russian aggression in Ukraine. St. Kitts and Nevis had, in fact, co-sponsored a resolution of the United Nations condemning the Russian aggression against Ukraine. We had, through the OAS, also issued a very strong statement. Even in the recent CARICOM/Canada meeting, a reference again was made to the Ukraine situation,” said the Hon. Mark Brantley, Minister of Foreign Affairs, about the Federation’s abstention from the vote.

“We were frankly concerned that additional statements, additional resolutions dealing with the same matter would not advance the position any more than where it currently stands. And that what we really needed was more concerted action in relation to seeing how, through diplomacy, of course, we could limit Russia’s continued aggression against the people of Ukraine. So for us, really, it’s a question of how much more can we do as a small country, and we feel that we have in fact demonstrated most forcefully our condemnation of this war against the people of Ukraine.”

Will St. Kitts and Nevis continue along the same vein in future votes concerning Russia so long as the invasion persists? The short answer is no.

“I would say that we would evaluate on a case by case basis, but on this occasion, we really did not understand the value of what was proposed because the advice that we got, although it was on very short notice, was that this really wouldn’t do much very much in terms of any movement on the ground in terms of what I think all of us are interested in, which is a cessation of the hostilities in that theatre. So you would realise that several Caribbean countries did, in fact, abstain because I think many of us were of a similar view that we had already and in multiple international forums, already demonstrated quite clearly our position and our vociferous condemnation of what had happened in Ukraine,” said Minister Brantley.

Russia is also a part of another major UN council. The country sits on the UN’s Security Council.

Can we expect to see a similar move by the UN to remove/suspend Russia from that council? No.

Zelenskyy, on Tuesday (April 5), called on the security council to do one of two things; “remove Russia as an aggressor and a source of war so it cannot block decisions about its aggression … Or the other option is [to] please show we can reform or change, dissolve yourself and work for peace.”

The UN charter has no outline for removing a permanent member of the Security Council.

The following five are permanent members of the Security Council:

Russia, a permanent member of the Security Council, has veto powers, and the Council cannot recommend Russia’s removal without the country’s agreement.

A country can be removed from the General Assembly on a recommendation of the Security Council according to Article 6 of the charter.

The Security Council was set up after the Second World War. The five states were granted permanent membership on the Council based on their importance in the aftermath of World War II, charged with ensuring international peace and security.

Libya was the first to lose its seat on the Human Right Council in 2011, after the civil unrest in the North African country ended Muammar Gaddafi’s rule.