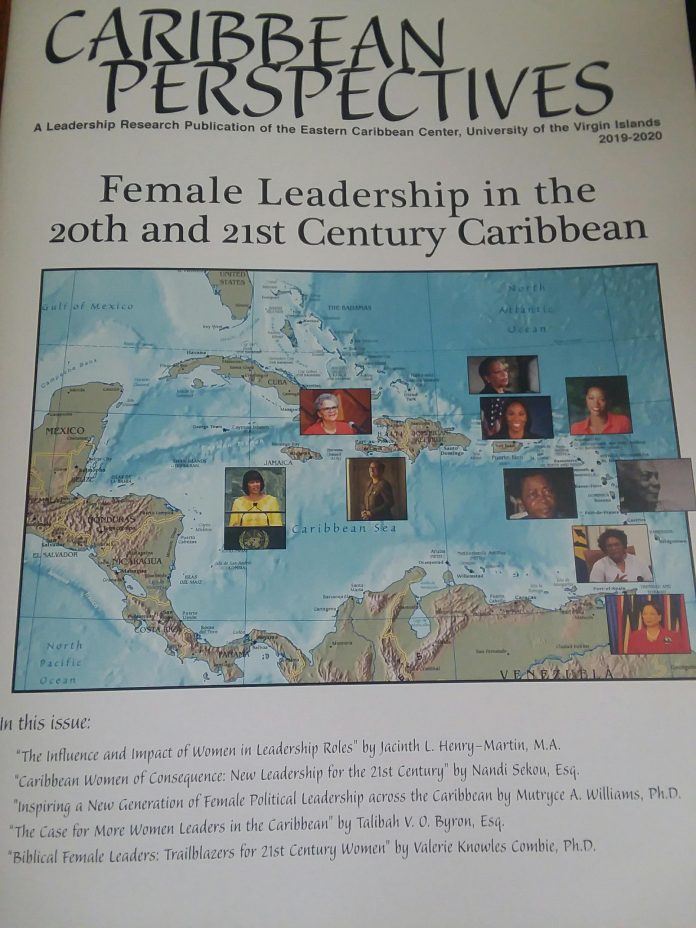 Featured in the recently published issue of Caribbean Perspectives under the theme, “Female Leadership in the 20th and 21st Century Caribbean,” are Kittitians; Advisor with responsibility for OAS National Offices in the Americas at the Organization of American States Her Excellency Jacinth Henry-Martin, International Relations and National Security Specialist Dr. Mutryce A. Williams and Attorney Talibah V. O. Byron.

Common threads woven throughout the three submissions are the need for Caribbean women to ‘stop leading from behind, stop sacrificing their expertise, skills set and often their truth in campaigning, coordinating, and negotiating to win elections often for a full slate of men.’ The authors also highlighted the need to ‘question and challenge the structural, societal, political, economic, and cultural constraints that have and continues to prevent women from aspiring not only to political office but to the highest office in their respective countries.’

Editor of the publication Dr. Frank L. Mills, in his editorial noted, “This issue of Caribbean Perspectives shares the views of five prominent Caribbean females, all leaders in their own rights, and who are proponents of the views of charismatic Caribbean leaders who articulate their vision with clarity, decisiveness, courage, passion, and humility.”

Caribbean Perspectives is a product of the Eastern Caribbean Center (ECC). The ECC is a resource organization that conducts research and associated training, technology transfer, and information dissemination, responsive to development of issues in an evolving U.S. Virgin Islands and applicable to small island communities. It conducts and sponsors research in the U.S. Virgin Islands and the rest of the Eastern Caribbean and disseminates information to enhance the contributions of scientific inquiry to human well-being in the Caribbean region.

Founded in 1962, UVI is a public, co-ed, land-grant HBCU (Historically Black College and University) in the United States Virgin Islands (USVI). Approximately 2,500 students are enrolled on the two campuses: the Albert A. Sheen Campus on St. Croix and the St. Thomas campus. The institution offers 47 undergraduate and graduate degree programs across its five colleges and schools.

UVI boasts more than 7,000 alumni who excel as physicians, attorneys, judges, politicians, university administrators, teachers, nurses, and many other professionals. Among the many accomplished former UVI students are two Rhodes Scholars and a Pulitzer Prize-winning journalist.