US Capitol Under Lockdown After Security Threat 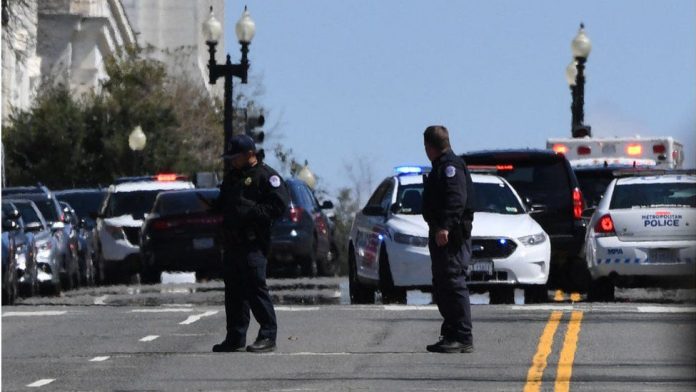 Washington, USA (BBC) -The US Capitol building is in lockdown after a vehicle reportedly slammed into the security barriers surrounding the complex, police say.

Capitol Police said that a suspect is in custody after reports that someone “rammed a vehicle” into two officers.

The suspect and the two officers have been taken to hospital, police said.

The Capitol and surrounding streets in Washington DC are in lockdown after police warned of an “external security threat”.

Footage of the scene has shown a helicopter flying overhead and what appeared to be two people on stretchers being moved into ambulances.

Onlookers have been told to clear the area.

Congress is currently in recess, meaning the majority of lawmakers are not at the Capitol today.

President Biden left Washington earlier in the day for Camp David, the presidential retreat in Maryland. Some reporters, maintenance workers, and Capitol Hill employees are likely still on the Capitol grounds.

The BBC is not responsible for the content of external sites.

The incident comes nearly three months after the deadly 6 January riot at the Capitol.

Shortly after 13:00 local time (18:00 GMT) the Capitol Police alert system sent an email to lawmakers and their staff ordering them to stay away from exterior windows and doors. Anyone outside was instructed to seek cover.

The entry point on Constitution Avenue where the vehicle struck the barricade is directly where Senators and their staff come to the Capitol each day,