Home News Regional News US Embassy in Trinidad Says Maduro To Be Blamed For Crisis in...
NewsRegional News 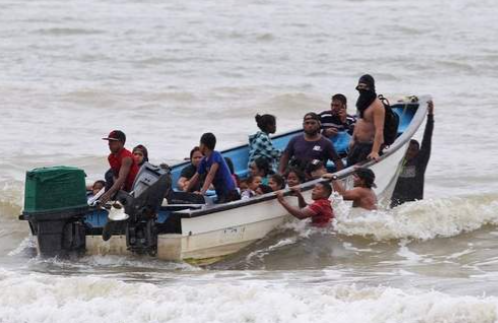 PORT OF SPAIN, Trinidad (CMC) — The United States Embassy here, has stated that the regime of Venezuelan President Nicolas Maduro and those who back him, must be blamed for the crisis facing the South American nation.

In a statement on Sunday, the Port of Spain based Embassy said the crisis is not due to sanctions — as there are no sanctions or restrictions on the importation of food and medicines to Venezuela.

“There are no sanctions or restrictions on the importation of food and medicines to Venezuela, while the Maduro regime uses its revenues to buy Russian weapons instead of food. The United States is the single largest donor of humanitarian assistance for the Venezuela regional crisis and has contributed more than US$1.2 billion to the cause since 2017 alone, including over US$11 million to support Trinidad and Tobago’s efforts in helping Venezuelans living in the country.”

The statement added that the absence of a democratic system, ongoing systematic human rights violations, acute food shortages, precarious health systems, an electricity crisis, generalised violence, and economic collapse are some of the key causes that have forced more than five million Venezuelans to flee their country since 2015.

“Venezuela’s exodus under Maduro has become an unprecedented displacement crisis for the Western Hemisphere. Many continue to attempt to blame sanctions, but the Venezuelan economy was in free-fall long before the United States began to impose sanctions in August 2017.”

The statement follows the recent drowning of over 20 Venezuelan nationals, including women and children, who drowned near the Venezuelan coastal town of Guiria several days ago.

According to reports, the Venezuelan nationals were en route to Trinidad.

The Caribbean Broadcasting Union (CBU) has welcomed a ruling by the Supreme Court in Trinidad and Tobago, which has struck down the use of...
Read more
Regional News

(Demerara Waves) The opposition A Partnership for National Unity+Alliance For Change (APNU) on Friday signaled strongly that it would be registering its objection to...
Read more
Regional News

The Police have formally arrested and charged 35-y

The deaths of Customs Officer Andrew Douglas and S

Minister of Information and Communication Technolo

The Department of Gender Affairs is receiving full

In keeping with the United Nations Sustainable Dev