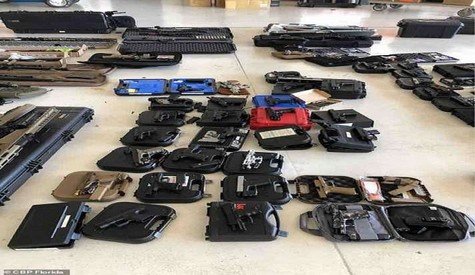 Two Venezuelan pilots — Luis Alberto Patino and Gregori Mendez — were arrested Saturday and charged with smuggling bulk cash and goods from the U.S. and illegally possessing firearms as aliens, U.S. Customs and Border Protection said in a news release. The plane and its cargo were seized, the statement said.

It was not clear why the weapons were purchased. But the arrest comes as tensions between the U.S. and Venezuela have escalated in recent months, including allegations that opponents of President Nicolás Maduro had been seeking the support of a former U.S. Green Beret to violently overthrow the socialist leader.

The Venezuelan-registered Lear jet listed as its destination the Caribbean island of St. Vincent and the Grenadines, the U.S. statement said.

But Jared Rine, a special agent with Homeland Security Investigations, said in an affidavit supporting the criminal complaint that one of the defendants said after being arrested that the aircraft’s ultimate destination was Venezuela.

“From my training and experience, I know that pilots have filed flight plans to third party countries to avoid detection of their ultimate destinations to avoid scrutiny of law enforcement authorities,” Rine wrote.