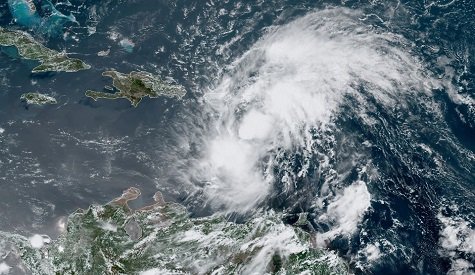 WASHINGTON, United States (CMC) — The United States weather agency has warned that tropical storms may continue to develop past the official hurricane season which ends on November 30.

The US National Oceanic and Atmospheric Administration (NOAA) said that the extremely active 2020 Atlantic hurricane season is drawing to a close with a record-breaking 30 named storms, 12 of which made landfall.

“While the official hurricane season concludes on November 30, tropical storms may continue to develop past that day,” said NOAA in a statement, noting that its seasonal hurricane outlooks “accurately predicted a high likelihood of an above-normal season with a strong possibility of it being extremely active”.

“This is the most storms on record, surpassing the 28 from 2005, and the second-highest number of hurricanes on record,” the weather agency said.

NOAA said the 2020 season got off to an early and rapid pace, with a record nine named storms from May through July, “and then quickly exhausted the 21-name Atlantic list when Tropical Storm Wilfred formed on September 18”.

For only the second time in history, NOAA said the Greek alphabet was used for the remainder of the season, extending through the 9th name in the list, Iota.

“The 2020 Atlantic hurricane season ramped up quickly and broke records across the board,” said Dr Neil Jacobs, acting NOAA administrator.

“Our investments in research, forecast models and computer technology allowed forecasters at the National Weather Service, and its National Hurricane Center, to issue forecasts with increasing accuracy, resulting in the advanced lead time needed to ensure that decision makers and communities were ready and responsive,” he added.

NOAA said this is the fifth consecutive year with an above-normal Atlantic hurricane season, with 18 above-normal seasons out of the past 26.

“This increased hurricane activity is attributed to the warm phase of the Atlantic Multi-Decadal Oscillation (AMO) — which began in 1995 — and has favoured more, stronger, and longer-lasting storms since that time,” NOAA said.

“Such active eras for Atlantic hurricanes have historically lasted about 25 to 40 years.”

“These included warmer-than-average Atlantic sea surface temperatures and a stronger west African monsoon, along with much weaker vertical wind shear and wind patterns coming off of Africa that were more favourable for storm development,” he added.

NOAA said this hurricane season may officially end on November 30, “but it is still possible for additional storms to develop”.

“Stay vigilant and make sure your family is weather-ready,” it urged.

The 2021 hurricane season will officially begin on June 1. NOAA said its Climate Prediction Center will issue its initial seasonal outlook in May.