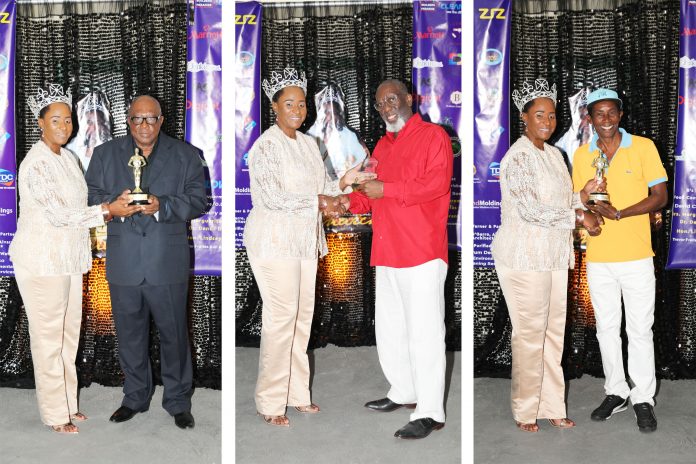 BASSETERRE, ST. KITTS (MMS-SKN) — At a colourful event dubbed ‘A Celebration with the Monarch 2020-2021’ reigning National Senior Calypso Monarch Gloria Esdaile Robinson, stage name Queeny-G, did what no other monarch before her has done – she recognised contributions of fellow calypsonians and supporting affiliates by awarding them.

Held at the Mill House, Garvey’s Estate in Boyd’s, West Basseterre, on Sunday February 14, the event saw the official launch of her video ‘We’re in this together’, and the highly anticipated ‘Monarch’s Choice Awards’ which, according to Queeny-G, “seeks to honour the contributions of calypsonians and supporting affiliates for their continuous participation, promotion and development of the Calypso art-form and industry.”

Receiving top awards included the person she dethroned to capture the Senior Calypso Monarch title, Sylvester Hodge stage name King Socrates, who was one of the three recipients of the ‘Lifetime Achievement Award in Calypso’. He was awarded for ‘Calypso Development’ which was sponsored by the Minister of Tourism et al the Hon Lindsay Grant.

Other ‘Lifetime Achievement Award in Calypso’ recipients were Daven Liburd, stage name Lord Kut, who has participated in all 48 carnivals, but was taken ill and could not take part in the Sugar Mas 49, was awarded for ‘Long Service’ which was sponsored by Trevor Fraites & Associates, and Glen Hanley of Grand Masters Proud Sounds who was awarded for ‘Sound Engineering’ which was sponsored by Jenkins Ltd.

“For this year’s awards, a panel of experienced calypsonians/writers and engineers were tasked with the responsibility to select nominees from amongst the calypsonians and supporting affiliates who participated in Sugar Mas 49,” said Queeny-G, who during Sugar Mas 49 became only the second woman to ever be crowned Senior Calypso Monarch.

The extraordinary event held on Valentine’s Day evening, ‘A Celebration with the Monarch 2020-2021’, was emceed by Andy Blanchette, with the category descriptions for ‘Monarch’s Choice Award Segment’ being read by Lanein Blanchette, while Clement ‘Monarch’ O’Garro, and St. Clair ‘G-Cue’ Liburd announced the category nominees and winners.

The categories included ‘Best Personally Uplifting Calypso’ that had five nominees, in which Kibiane Willett ‘Queen Kibi’ was declared the winner for her song ‘Don’t Give Up’; ‘Most Entertaining Calypsonian’ that had four nominees which went to Daven Liburd ‘Lord Kut’; and ‘Best Witty Calypso’ which had three nominees and was won by Junior Newton ‘Bad Man Polo’ for his song ‘Mark that mother.’

“I really prefer to honour others – that I guess is part of my nature,” observed Queeny-G. “Calypso is alive – I am just doing my part. I have been given a responsibility and tonight really I wanted to do something extra special. I feel it is important for us to recognise calypso and the contribution calypsonians and the affiliates, the persons who help to make calypso what it is.”

‘Best Political Commentary’ attracted four nominees who were outdone by Duncan Wattley ‘Big Lice’ for his song ‘We want to know’; ‘Most Improved Calypsonian’ category which had five young lady calypsonians saw the award go to Venetia Clarke ‘Lady Composer’; while the ‘Media Award for the Best Promotion of Calypso Music’ had four radio stations from both St. Kitts and Nevis contending for the award which however went to ZIZ Broadcasting Corporation.

‘Rising Star in Calypso’ category had five nominees, and winning here was ‘Singing Sensation’ Tiandra Francis who will receive the sponsorship opportunity to produce/record one song at the Monarch’s Studio, Abo’s Digital Factory, in Gingerland, Nevis.

In the ‘Best Calypso Writing Award 2020-2021’ four names of great song writers were presented, and winning was Bernard Wattley who wrote ‘We’re in this together’ that was sung by the eventual winner Queeny-G. The same song won Antonio Abonaty Liburd the ‘Best Calypso Arrangement 2020-2021’ award from a field of four nominees. Two outright winners were Kimberly Gumbs who received the award for ‘Most Dedicated Female Calypso Fan’ and Warren Bradshaw for the ‘Most Dedicated Male Calypso Fan’ award.

In thanking her many sponsors, most of whom were present or represented, Gloria Esdaile Robinson said: “I trust that the sponsors who have supported us this time around are pleased with the showing tonight, and will be willing to come on board next year’s event. We are going to make this a February event. It is all about the love for calypsonians, and I know a lot of the times we experience challenges because some persons win, some persons thought they should have won, some persons lose.”