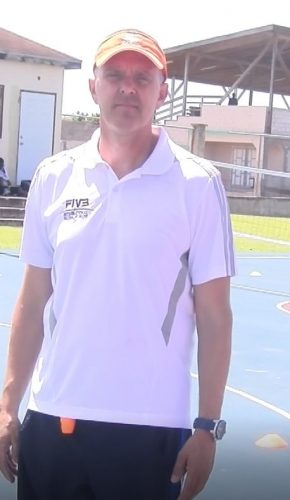 The facilitator of the program is Gordon Mayforth of the USA, who has been coaching for over 36 years and has a world championship as part of his honours when he coached the USA team to victory in the world games in 2001

He has also lived and coached in 8 countries and Volleyball has taken him to 73 different countries.

Some of the teams/countries that he has coached include:

Approximately eight local coaches are involved in the coaching training program and they are being taught basic skillsets, which they will in turn attempt to pass on to the children in the Primary and Secondary Schools and also to the adults within the community.

According to Coach Mayforth, the training will be helpful in other disciplines outside of Volleyball.

One of the training techniques being utilized is the SMASH VOLLEY method of playing the game, which is a fun method which is being utilized to introduce persons to the game and get them interested, before getting into all of the hard and fast rules of the game.

Coach Mayfort who is being paid by the (Federation Internationale de Volleyball) FIVB, sees potential in the coaches who he is training and also sees a potential for the game to develop on the island.

One of the local coaches, Kerisha Powell, spoke on behalf of the participants and noted that they would have learnt a lot thus far and stated that the training program has been interesting and useful.

She is looking forward to getting more persons locally involved in the game and anticipates the day when the sport can became one of the major sports on the island.