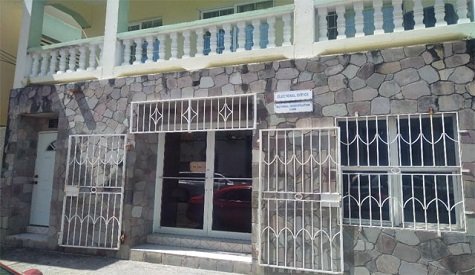 While all candidates have been officially nominated, the day was not without challenges. The issuance of the voter’s list is one of the day’s issues.

In Constituency No 8, the Leader of the St. Kitts Nevis Labour Party, Dr Terrance Drew was the first to be nominated in that area; however, he did not immediately vacate the area after finishing his nomination process.

Dr. Drew explained, “So I expressed some concerns about the list because I am supposed to be presented with a list on nomination, and that is part of the rule. I spoke with the supervisor of elections, I reached an agreement with him, and so I collect my list today. But the rules must always be followed as far as I am concerned so that there can be a smooth process and we can have confidence in the system; we cannot take any chances with our democracy, as I have been saying from time to time.”

While waiting for the issuance of the voter’s list, People’s Action Movement Candidate for No 8, Chesley Hamilton, who, according to the PAM’s Nomination Day schedule, was expected to start his nomination process at 11 a.m., an hour after the start of Dr Drew’s nomination, was unable to proceed with his nomination at the scheduled time.

“We were scheduled to do it at 10 o’clock; the other side said they wanted 10 o’clock, so we deferred to them and then we can for 11, and they were still here hesitant to move out of the way, and I just found that to be discourteous. So I can down and [told] the police that I have an appointment with the officials for 11 o’clock and it is time for me to get on with matters of state… and the police [were] able to clear the way so that we can proceed,” said Hamilton.

The voters’ list has been a hot-button topic in the Federation since the announcement of the dissolution of Parliament on May 10 and the unconfirmed reports that followed suggesting voter padding and other misgivings in the Electoral Office.

“Remember, there is a process. You register, your name comes on a preliminary list; all people get to see the list, they would make objections, and the registration officer is to carry out an investigation and then, based on his investigation that would determine if the name appears on the revised monthly list, which is the final list for that previous month. If that has not been done, then that is a breach of the process… we have done the necessary work that we needed to do, but in our other constituencies, there are serious concerns, and those concerns must be addressed before the elections.”

Hamilton, the PAM Candidate for No 8, also raised concerns about issuing the voters’ list and other issues with the electoral process.

“Those matters are being handled by our legal team, and it’s being led from the candidates’ point of view by Jonel Powell. Those are matters that I know [are] the shenanigans of the incumbent Minister of Elections, and that is my problem with the old process. A Minister of Elections should not be, and the election process must be handled by an independent agency; for instance, in Canada, it’s Elections Canada. Elections Canada does its own registration. It does its own regulations, and therefore it’s an independent body that conducts elections.”

Hamilton continued, “I’m hoping for the day when we will have not only that but the biometrics to guarantee one man one vote because we asked that many years ago. I demonstrated. I got arrested for demonstrating for electoral reform, and when it is not done even after 20 years of the former government that I demonstrated against and seven years of this one, that is why I really have to get in the room to make sure that these things are done. I am not sacrificing my citizenship and my healthcare and all of these things to come here to not get these things done on behalf of my born-in-land. My born-in-land land must be the bedrock of democracy.”

In a recent press release from the PAM, the party suggested that the electoral process was being infringed.

In the release, it read, “Chairman of PAM and the candidate for Central Basseterre Jonel Powell has recently taken action to have the issues and concerns addressed in accordance with the laws of St Kitts and Nevis.”

Powell claims that attempts are being made to ignore the law and the election regulations. “The laws clearly state that a revised voters list for a given month can only be published after all objections have been determined by the registration officer.

However, the people of St. Kitts and Nevis should be made aware that the government has instructed the Electoral Commission to ignore the law and to publish a revised list for the month of May, despite the fact that there are still outstanding objection hearings for persons who registered to vote in that month…

In light of this, the People’s Action Movement has formally written to the Supervisor of Elections, making it clear that the list of voters to be used for the Friday, August 5, 2022, general elections can only be the one up to April 2022, if all objections to the May 2022 list are not fully completed,” read the release dated July 25.

WINN contacted the supervisor of election Elvin Bailey on July 29, who said that candidates do not receive a list on nomination day, but a designated person from each party would collect the list.

Bailey said, “Each party would be entitled to a list, and they have identified a particular person who would come to the office and collect that list. So yes, they are entitled to a list, but each candidate, to the best of my knowledge, I’ve never seen… does not get a list on nomination day from the returning officer… We would normally call the person who they have designated and tell them the list is ready; come and collect.”

The people of St. Kitts and Nevis head to the polls on Friday, August 5, 2022, to elect a new government, three years before one is constitutionally due, following the collapse of the tripartite Unity Coalition.