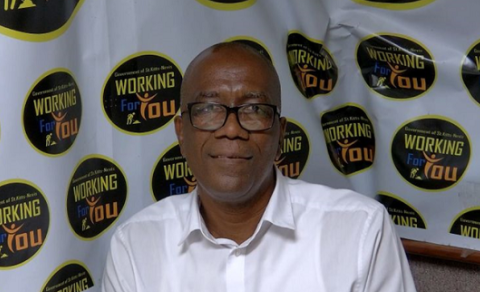 St. Kitts and Nevis (WINN): Sourcing and supplying water are not just hit by the increase in demand for the natural resource, but the effects of global warming are also affecting the supply.

“I believe that climate change is something that is real; we may not necessarily be feeling the impacts today. But we have to think long term when it comes to water and the sustainability of water. So we have to make decisions today that take into consideration the potential long term changes that may happen in the climate, such as more or longer, or more severe dry spells or drought,” said Cromwell Williams, manager and Water Engineer in the St. Kitts Water Services Department.

Various authorities have addressed the decrease in rainfall and increase in droughts in the Caribbean.

Last year parts of the Caribbean were under drought watch or warning, including St. Kitts and Antigua and Barbuda.

Following the warning, Water Engineer Williams reported that rainfall for May 2021was far below expectations.

Rainfall from January to April 2021 was approximately 6 inches, half the amount for the same period in 2020.

Authorities continue to search for new water sources by drilling wells, limiting the amount of water supplied and calling for consumers to conserve water.

“We might have been getting a certain amount of rain throughout the year. At times we have a decrease in that, we have [a] drought. And these are things that directly affect our groundwater supply. In each of our wells, we have a specific amount you’re supposed to take off at any one time; in order to maintain a balance between the seawater and the freshwater is laying upon, we have to be very careful with how we take off that water to give the well a chance to replenish itself, so to speak,” Malcolm Herbert Clerk of Works with the St. Kitts Water Department explaining when there are limits on the amount of water sourced from wells and supplied to consumers.

Williams said St. Kitts is blessed with its topography and geology and explained how the water is sourced from wells.

When sourcing the water from wells through groundwater from the island’s mountainous regions, there is naturally concern over the water quality and risk of pollutants.

“Because we have groundwater, we have to be careful how we discharge [wastes] or chemicals. We are particularly concerned about things like used oil from mechanical shops and so on. That is very important… We have to be very careful how we use and dispose of any and all types of chemicals in St. Kitts. [It] may take a very long time, but it can eventually, just as the water falls on the ground and eventually makes its way down to the water table, the same way the chemicals that the disposal will eventually make their way down to the water table. And so for that reason, we have to be very careful as to how we deal with [the] potential of polluting our groundwater.”

According to Williams, desalination and water catchment provisions are inevitable as alternative water sources.

The process of desalination has not become a part of the Federation’s plan to source water because of the cost associated with operating a desalination plant.

The sharp rise in the price of crude oil as a result of the ban on Russian oil in the United States aside, COP-26 held last year, had 20 countries, including the US, Canada, and the United Kingdom pledging to reduce their reliance on natural gas and investing more in renewable, climate-friendly energy sources.

St. Kitts and Nevis was one of many Smalls Island Developing States (SIDS) lending their voice to the reduction in the reliance on natural gas, investing more in renewable, climate-friendly energy sources and investment in action plans geared towards helping SIDS resist the effects of climate change, Hurricanes, floods, severe droughts etc.

The Federation’s reliance on fossil fuels to power possible desalination plants would directly oppose the move to reduce reliance on natural gas. Supplying water through desalination may also not be economical considering the current negligible cost of water in the Federation.