“We Have Great Expectations of You!” Executive Command Tells Newly Confirmed Corporals 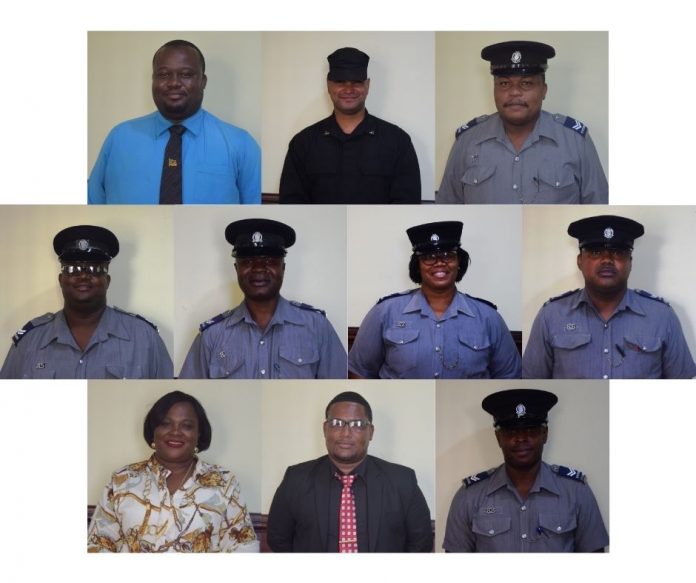 Confirmed are Officers Cleon Michael, Ryan Haywood, Dijon James, Leon Michael, Royston Isaac, Kamara Phillip, Antonio Browne, Andrea Battice, Vivian Caesar and Ronrick Huggins. Their confirmation takes effect from October 01, 2018. The confirmation is an indication of their ability to perform satisfactorily at that rank. Members of the Executive Command of The Royal St. Christopher and Nevis Police Force congratulated the Officers and shared words of advice before the letters were handed out.

Commissioner of Police Hilroy Brandy thanked them for supporting the Force’s efforts to tackle crime. There has been a marked decrease in crime over the past two (2) years. The Commissioner disclosed his belief that they played a role in that achievement while acting as corporals. He alerted them of their eligibility to become a candidate for promotions to the rank of sergeant.

“You should always try to perform at the standard of the rank just above where you are. There are some 10-12 vacancies that exist at the rank of Sergeant that you can now set your eyes on,” Commissioner Brandy informed the Officers.

Assistant Commissioner of Police (ACP), Andre Mitchell, wished them the very best. He reminded them that they were not only responsible for the quality of their own work, but also that of their subordinate Officers. ACP Mitchell said, “we must enforce the policies of the force.” He went on to speak about some of the challenges related to work ethic that could affect their productivity and encouraged them to rise to the occasion in their conduct and performance.

Assistant Commissioner of Police, Adolph Adams, told them the Force needed strong supervisors, adding that it started with them. “The promotion means you are seen as someone who could help to take the organisation forward…you have to first be disciplined before you can discipline others,” ACP Adams said.

The newly confirmed Corporals were encouraged to do their best and raise the bar higher by the Force Chaplin, Ericsson Cumberbatch, who said, “regardless of where you find yourself, remember to perform.”

“What is success?” asked the Force Personnel Officer, Clifford Govia, who said the Officers should give the question some thought. “We know you have the talent, but you have to continue sharpening your skills. Make up your mind to do your part well,” Mr. Govia advised.