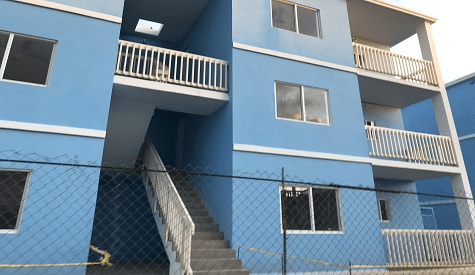 St Kitts and Nevis (WINN): Several months after two units of the housing complex on Wellington Road were completed, it has not been opened and may still need additional work.

The US$8 million dollar project, which was part-funded by the Venezuelan government, saw the residents being relocated so that work on the complex can be completed.

Media reports pointed to September and October 2019 as being the completion period for Phase One of the three-phase project.

Under Phase One, 24 apartments were expected to be completed and distributed by October 2019, according to Minister of Public Infrastructure Ian Liburd.

The minister was quoted by media reports as saying: “We anticipate that the first two units, comprising of some 12 apartments, will be completed just before Independence in September this year, then we will complete the other two in October.

“So, by the end of October we should have at least four units comprising 24 apartments. The 24 apartments will be allocated…by September.”

Shortly after his nomination on Wednesday (May 27), the Minister was asked for an update on the project by WINN FM.