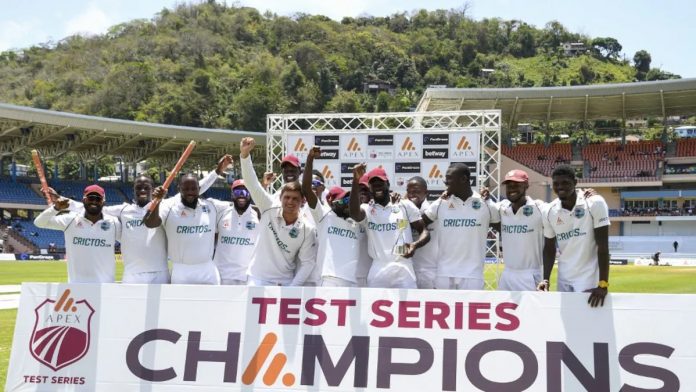 ST GEORGE’S, Grenada (CMC) — Buoyant West Indies needed all of 90 minutes on Sunday as they crushed England by ten wickets inside four days to capture the first-ever Richards-Botham Trophy series.

Veteran seamer Kemar Roach (2-10) quite fittingly snatched the last two wickets to wrap up the England second innings for 120, after the tourists resumed the penultimate morning of the decisive third Test on 103 for eight — only ahead by 10 runs.

Requiring a mere 28 runs for victory, Captain Kraigg Brathwaite guided West Indies home with an unbeaten 20, as the hosts got over the line in just 29 balls, half-hour before the scheduled lunch interval.

“We had a camp from before the series and we sat down and decided this one of our best series at home and we have to fight hard,” said Brathwaite, adjudged Man-of-the-Series for his 341 runs at an average of 85.

“From the camp we put in a lot of work — four, five hours a day, six days a week — and from there it started.

“And it just carried through each game with someone new raising their hand and doing the job, whether in the field, with the ball or with the bat, or spending time.

“The effort was remarkable.”

England kept West Indies at bay for the best part of the opening hour before Chris Woakes (19) became the morning’s first casualty, brilliantly caught by Jason Holder swooping to his right at leg slip off Roach’s first ball of the day.

And Roach knocked over Jack Leach for four in his next over to end the innings, the left-hander nicking behind, but West Indies gaining the decision only after recourse to DRS.

With a straightforward target before them, West Indies wasted little time, Brathwaite hammering back-to-back boundaries off pacer Saqib Mahmood in the fourth over and following up with a sizzling cover drive for four off Woakes in the next over.

“Yesterday was a really frustrating day. It was an important day in the series and we just didn’t manage it as well as we could’ve and that we’ve shown that we can do in the first two games,” said England captain Joe Root.

“After a difficult winter, we showed a lot of promise in the first two games and I think we have made some strides forward but it is frustrating but credit to the West Indies, they played some brilliant cricket.”

The series win was the second over England in four years but only West Indies’ first in their last four tours, following defeats to Sri Lanka and South Africa and stalemates against the Sri Lankans and Pakistan.