West Indies Lose by An Innings And 134 Runs 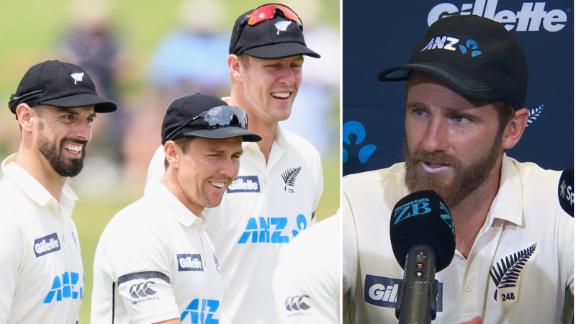 Unbeaten on 80 overnight, the 29-year-old reached triple figures approaching the first hour of the day, before being eighth out for 104, as the Caribbean side collapsed to 247 all out in their second innings, 40 minutes before lunch.

Tail-ender Alzarri Joseph, resuming the morning on 59, batted with aplomb for his career-best 86 but once he departed in the second over after the drinks break, West Indies lost their last three wickets for as many runs in the space of 10 balls.

Blackwood cracked 11 fours and two sixes off 141 balls in four hours at the crease while Joseph faced 125 deliveries in two and three-quarter hours and counted nine fours and three sixes.

Left-arm seamer Neil Wagner claimed two of the wickets to fall, including that of Blackwood’s, to end with four for 66 while the six-foot, six-inch Kyle Jamieson finished with two for 42.

The defeat extended West Indies’ nightmare run on New Zealand soil where they have not won a Test in their last 13 appearances.

Resuming the morning on 196 for six still needing another 185 runs to make the hosts bat again, West Indies safely navigated the first hour without alarm to reach 239 without further loss.

Blackwood survived a chance in the fifth over when Ross Taylor dropped a sitter at slip off seamer Tim Southee and moved into the 90s with a glorious cover drive off left-armer Trent Boult.

Having played aggressively throughout, he then reached his century, his first since his unbeaten 112 against England five and a half years ago, in contrasting style with a single into the on side off the first ball of Jamieson’s first spell of the morning.

Blackwood continued to find support from Joseph with whom he extended his seventh wicket stand to 155, before they were separated.

For his part, Joseph played authoritatively, pulling Southee and then Boult for sixes in successive overs to coast into the 70s.

The thought of a maiden Test hundred was becoming an increased reality when his long innings finally came to an end almost immediately after the drinks break, holing out to deep point off Jamieson.

Blackwood followed in the next over with three runs added when he pulled Wagner to square leg and Shannon Gabriel had his stumps shattered four balls later in the same over with no addition to the total, to deal the Windies demise.

Wicketkeeper Shane Dowrich did not bat in either innings because of a hand injury.

The next Test bowls off at the Basin Reserve in Wellington on Friday.

K Roach not out 0

Result: New Zealand won by an innings and 134 runs.