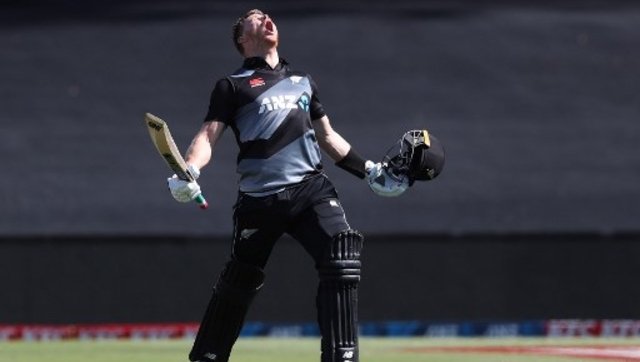 Mount Maunganui (AP): Glenn Phillips had already been acclaimed the toughest man in New Zealand cricket. On Sunday, he became the most valuable as he struck a 46-ball century to lead New Zealand to a 72-run win over the West Indies in the second T20I and a 2-0 lead in the three-match series.

In a partnership with South Africa-born Devon Conway, who finished unbeaten on 65 after a maiden T20I half-century, Phillips added 185 runs and lifted the Black Caps to 238-3, their third-highest T20I total.

Captain Kieron Pollard tried to blast the tourists to victory in the face of New Zealand’s massive total and following his 75 from 37 balls in the first match of the series. But he hit three sixes in a row off left-arm spinner Mitchell Santner before he holed out for 28 in the same over to New Zealand captain Tim Southee on the long-off boundary.

Phillips took two catches in the West Indies innings, including a brilliant effort to dismiss Kyle Mayers on debut. He ran around the boundary, dived and grabbed an outstanding catch which helped confound the tourists’ run chase.

Phillips dislocated his kneecap running between wickets in the first match of the series at Auckland on Sunday, a gruesome and painful injury. By the time New Zealand physiotherapist Tommy Simsek reached him in the middle he already had “popped” the kneecap back into place and hit the next ball for six, batting on to make 22.

His kneecap popped out again during his innings on Sunday but again he batted through the pain to become only the fourth New Zealander after Brendon McCullum, Martin Guptill and Colin Munro, who all did so more than once, to post a T20I century.

“It was absolutely brilliant,” Phillips said. “Dev (Conway) is an absolutely amazing guy to bat with. He keeps you calm under pressure. To be part of a partnership that big is just unbelievable.

“My knee went again. It’s okay as long as I keep it in straight lines and it didn’t go as badly as the first time.”

New Zealand were sent in after losing the toss and were solid throughout their inning on a slow pitch. Tim Seifert and Martin Guptill put on 49 for the first wicket and Guptill made 34 from 23 balls before Phillips and Conway came together.

They were separated with only one ball left in the innings when Phillips was out for 108. Phillips reached his half-century from only 22 balls, with the second of three consecutive sixes he struck off Fabian Allen’s bowling.

Conway has been a major success, hitting 41 when he made his international debut in the first match of the series in Auckland. He was the leading run-scorer in all three formats in New Zealand domestic cricket last year and proved with his innings on Sunday that he will be a major player for New Zealand for years to come.

Conway played for Gauteng in South Africa before moving to New Zealand in 2017 for better opportunities. He sold his house and car and arrived in Wellington without contacts or friends, where his first thought was “what the heck have I done?”

He quickly established himself if the Wellington provincial team and was grabbed by the Black Caps when he qualified to play for New Zealand on residential grounds in August.

The third match of the series is at the same venue on Monday and the first of two tests between the teams begins on Thursday.

Caption: Glenn Phillips struck a 46-ball century to lead New Zealand to a 72-run win over the West Indies in the second T20I. (AFP)