Experienced off-spinner Anisa Mohammed will serve as interim captain as Stafanie Taylor is unavailable for the T20I series due to serving a period of isolation in Antigua, after being identified as a primary contact of a COVID-19 positive case in Jamaica.

Lead Selector for Women’s cricket, Ann Browne-John said: “The CG Insurance T20I and ODI Series against South Africa gives another opportunity for the team to play international matches ahead of the upcoming ICC World Cup qualifiers. It is unfortunate that Stafanie will not be available for this series but there are a number of experienced players who we would be looking to, to fill any void. The young player Qiana Joseph brings another left-hand batter option as well as left arm orthodox bowling which has been lacking in the team. This will be a good test coming out of the recent Pakistan series, since South Africa is one of the higher ranked teams.”

Fans in the Caribbean can watch the all of the CG Insurance T20Is and and CG Insurance ODIs live via the Flow Sports app with live radio commentary is available on the Windies Cricket YouTube channel. Fans can also follow live ball-by-ball scoring in the www.windiescricket.com live match centre. 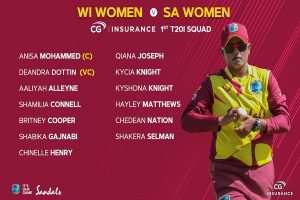