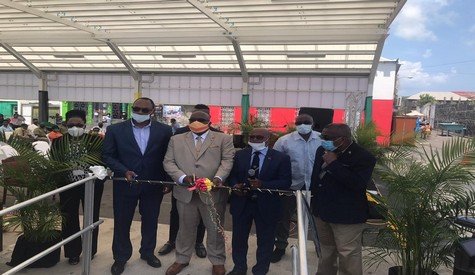 St Kitts and Nevis (WINN): The official opening and ribbon-cutting ceremony of the West Side Bus Terminal was held on Tuesday (September 22).

Construction started on Monday (October 21, 2019), and was expected to be completed and opened in December 2019 for the carnival season. However, according to Minister of Tourism, Transport, and Ports the Hon Lindsay Grant, the delay was as a result of the Carnival 2019-20 festivities and then the onset of the COVID-19 pandemic.

“Construction commenced sometime in October of 2019 using contractor E&J construction with its principal Errol Williams. Progress was protracted due in part to the onset of the carnival season and later the exigencies of the COVID-19 pandemic. The project was completed at the end of August this year at a cost of some 2.27 million EC dollars.”

The Project was completed in the latter weeks of August with a dry run set to run from August 26 to September 9.

Grant also noted that the project also includes the upgrade of the western washroom currently underway and should be completed in the middle of October.

Chairman of the St. Christopher Air and Sea Ports Authority, Damien Hobson in his opening remarks at the ceremony spoke about SCASPA’s involvement in the building of the new terminal as part of its corporate social responsibility program.

“…with the aim of complementing the upgraded ferry terminal which it operates and to improve the overall experience of the users of the facility within the Basseterre ferry terminal area.”

President of the West Line Bus Association, Nicholson “Rambo” Webster in his address expressed gratitude to all stakeholders involved including SCASPA, Ministry of Transport and Port and Law enforcement, for not just the terminal but also for including the bus associations and bus operators in the discussion in terms of how the new terminal will operate.

Webster expressed that the new system of operations has resulted in greater cooperation among passenger bus owners and operators. He also listed a few ways in which the new system has advanced the operations of the terminal.

“I would like to list a few reasons which include but not limited to a tremendous [reduction] in congestion in and around the bus terminal, improved safety for passengers and pedestrians, a much more organized system, less wear and tear on buses, [and] much more improved efficiency.”

Minister of Education, Youth Sports and Culture and Area Parliamentary Representative for St. Christopher 2, Jonel Powell, spoke about the terminal being just one of the ways central Basseterre will be enhanced. Powell also spoke about future projects in collaboration with other ministries to enhance Basseterre.

“I hold Mr. Grant and his ministry to the commitment given to the further upgrade of this facility, particularly in relation to the booths and the surrounding areas… our Deputy Prime Minister for his continued support as we put further infrastructural improvement as we go west…and many would have heard of the plans for a boardwalk going up the Irish Town Bay Road and other improvements such as… out Basseterre public market.”

“These organizations include but are not limited to the following; ADB Consultant with principal engineer Martin Lee for their gratis contribution of engineering services, CONTEC DT through Mr. Lincoln Pemberton for providing without cost all of the concrete for this project, the public works department for constructing the wheelchair ramp and for the supply of the compressor equipment to assist with the second phase of demolition works, The St. Kitts Electricity Services for acceding to SCASPA’s request to relocate poles and other utility cables.”

Prime Minister Dr. Timothy Harris in his remarks calls the new terminal a substantial investment in public transportation in the country and it should add to the efficiency and effectiveness in the delivery of public transportation in St. Kitts and Nevis. He added that the next step would be providing those who traverse to the St. Peter’s route with a new and convenient facility.

Harris went on to express commendation on the partnership of all stakeholders of the terminal.

“I was heartened by the remarks by the president of the [bus] association and the remarks by our new minister of tourism about the involvement of the bus operators in the build-out, the design and otherwise of this facility.”

Harris added that we must see Basseterre as the most beautiful city in the region and thus treat the development of its infrastructure as such; the redevelopment should minimize the existence of slums in the heart and center of our city’s spatial development.