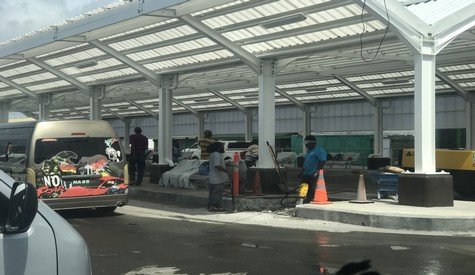 St. Kitts and Nevis (WINN): Work was continuing apace Friday (August 7) to complete the West Line Bus Terminal project which started on Monday, October 21, 2019, and was expected to be completed and opened in December 2019 for the carnival season.

However, for one reason or another, the project has been delayed. The latest reason of course being the COVID-19 pandemic. Friday, bus drivers complained about the slow pace of the project, some claiming that it was politically motivated and that led to the delay in its completion.

Nicholson ‘Rambo’ Webster, President of the West Line Bus Association is on record stating that bus drivers and vendors in the area were not consulted during the early stages of the project.

Friday, a vendor told WINN about verbal altercations with bus drivers relating to the operations of her business. The Vendor was expecting a delivery of some 20 cases of drinks to be dropped off at her stand. However, bus drivers, who now occupy the drop-off point, for their transport operations hindered the delivery of her supplies.

Another Vendor said apart from the exhaust fumes she had no other problems with the current situation.

After the completion of the drainage system in the early weeks of July, the Department of Public Works was set to pave the area the week of July 27 which was scheduled to take one week.

Although the terminal was set for completion at the end of July, currently additional work is still being done on the terminal as of Friday, August 7.

As it stands now, the terminal has been paved but is still under construction.

WINN FM reached out to Mr. Earl Williams of E&J Construction for comment on the status of the terminal which was scheduled to be completed in the final week of July 2020. He told WINN that his team was currently in the process of cleaning up but had no further information to share regarding the status as it relates to the operations of the terminal.

Additionally, fixtures including fire extinguishers and a WI-FI hotspot are expected to be installed. That work has not begun as yet.

WINN FM also reached out to the St. Christopher Air and Sea Ports Authority (SCASPA), the sponsor of the entire terminal project, for a comment but was unsuccessful.