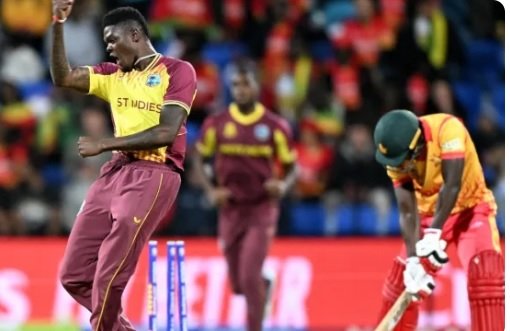 St. Kitts and Nevis (Sports Page) – The West Indies team came up against Zimbabwe in another qualifying match of the T-20 world cup 2022, on Wednesday.

However, Johnson Charles, in for the injured Brandon King, led the way in his usual pugnacious style, before being unfortunately run out.

Rovman Powell and Akeem Hosein starred in a critical partnership at the back end of the innings, to make the Windies total barely competitive, at 153 for 7 by the 20th over.

Zimbabwe started with a rush and with 29 from the first two overs.  It seemed like the Windies would be catching the next flight home.

Jason Holder also leant full support and suddenly the Zimbabwe team was not as confident as they started.

They eventually managed just 122 all out, to give the Windies team a life line in the tournament.