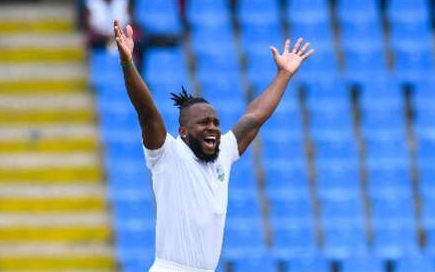 NORTH SOUND, Antigua (CMC) — Seamers Kemar Roach and Kyle Mayers both snatched a brace of wickets as Bangladesh spiralled in the morning session on day three of the second Test in Antigua on Saturday.

At lunch, the tourists were wobbling on 115 for six, still requiring a further 47 runs to avoid an innings defeat at the Vivian Richards Cricket Stadium.

The damage was done first by Mayers (2-16) and then by Roach (2-29), the two Barbadians sharing the four wickets to fall for 65 runs. Opener Mahmudul Hasan Joy, unbeaten on 18 at the start, resisted with 42 off 153 balls with three fours but perished with lunch approaching.

Resuming the morning on 50 for two, Bangladesh lost Najmul Hossain after the left-hander had added nine runs to his overnight eight, caught at first slip by John Campbell off Mayers just following the half-hour mark.

And Mayers struck again soon afterwards, hitting Mominul Haque in front for four, to leave the visitors struggling on 75 for four.

Roach completed a fine morning for the hosts, removing Liton Das for 17 to a catch at second slip by Mayers before getting Mahmudul to edge a drive behind.