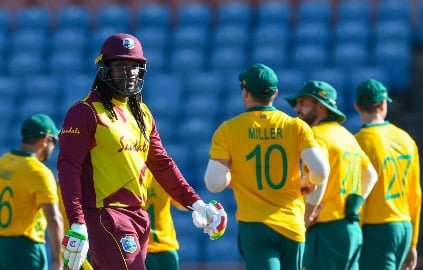 With the odds firmly in their favour after restricting South Africa to a modest 166 for seven off their 20 overs, West Indies looked in control at 62 for two in the ninth over but watched as their run chase quickly unravelled to finish on 150 for nine.

Opener Andre Fletcher top-scored with a measured 35 from 36 deliveries while Fabian Allen arrived late to blast an entertaining 12-ball 34, but veteran Chris Gayle (8), Nicholas Pooran (9) and captain Kieron Pollard (1) all fell cheaply in a cluster to hurt the innings.

And Pollard conceded afterwards his side had failed to properly negotiate the middle overs.

“It was just a matter of us trying to play smart and intelligent cricket and I just thought that in the middle overs there, between the overs seven to 11, 12, is where we kind of lost it a bit in losing three wickets — Pooran, myself and [Andre] Russell,” he said.

“There’s no secret about it, we’re aggressive players by nature but at times, Pooran and myself might need to temper our aggression to play that role for the team.

“So we accept that but it’s not going to take away our instinct of trying to play strong, aggressive, positive cricket because that’s our strength.

“There’s a long way to go in this 15-match series (including upcoming games against Australia and Pakistan) for us so we take it on the chin and we move on.”

South Africa had earlier lost momentum late on following a great start, to end on 166 for seven off their 20 overs after being asked to bat first at the Grenada National Stadium.

Captain Temba Bavuma top-scored with 46 from 33 deliveries while opener Reeza Hendricks carved out 42 off 30 balls and partner Quinton de Kock, 26 off 20 balls.

Left-armed seamer Obed McCoy finished with three for 25 and was supported by off-spinner Kevin Sinclair, who ended with two for 23 from his four overs after again being handed the new ball.

“We had to have those conversations [after losing on Saturday] as to where we could have improved in our disciplines and that’s exactly what we did,” said Bavuma.

“Guys came with an open mind, Guys knew they would have to be brave in the execution of their game plans and I guess the result showed that.”

Hendricks belted five fours and a six in a 73-run, opening stand with left-hander de Kock, who punched a couple of fours and sixes before gloving a paddle sweep behind off Sinclair in the seventh over.

Bavuma, who counted five fours and a six, then inspired small partnerships of 23 for the second wicket with Hendricks and 26 for the third with David Miller (11), but South Africa lost five wickets for 43 runs in their last seven overs to falter.

Sinclair accounted for Hendricks in the 11th, lbw missing a reverse sweep while Bavuma missed a slog and was bowled by pacer Jason Holder in the 17th.

In reply, Evin Lewis once again attacked from the start, striking three fours and a six in a 16-ball 24, in a 31-run, opening stand with Fletcher who managed two fours and a six.

But Lewis perished by the sword, attempting an ambitious pull at a quick, length ball from speedster Anrich Nortje and having his stumps shattered in the fourth over, and Gayle got a leading edge to cover off fast bowler Kagiso Rabada (3-37) in the next over to leave the Windies on 40 for two in the fifth over.

Pooran skied one into the deep off left-arm spinner Man-of-the-Match left-arm spinner George Linde (2-19) after adding 22 for the third wicket with Fletcher and with three runs added in the next over, Pollard fell to a brilliant catch at deep mid-wicket by Hendricks off left-arm wrist spinner Tabraiz Shamsi.

When Russell also holed out in the deep four balls later, West Indies had lost three wickets for eight runs off 11 balls to be tottering on 70 for five in the 11th over and facing a required run rate of nearly 10-½ runs per over.

Fletcher found an ally in Holder (20) to rally the innings in a 34-run, sixth wicket stand but once both fell in the space of three balls with a single run added, not even Allen’s five sixes could rescue the run chase.