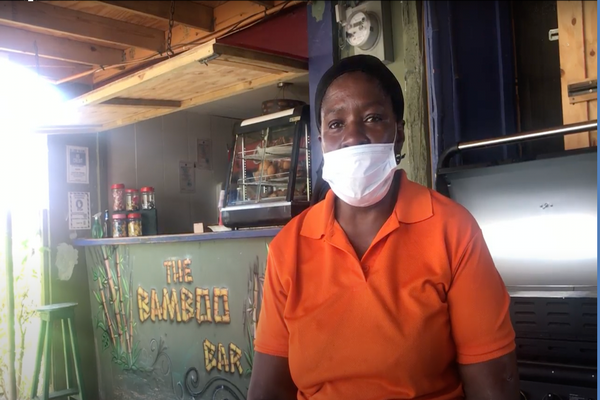 St. Kitts Nevis (WINN FM): Local bar and takeaway owner Shukura Tyson is keen to welcome customers back after COVID-19 has led to a significant decline in local trade for almost 2 years.

Tyson owns The Bamboo Bar on Liverpool Row, Basseterre. The 58-year-old told the WINN news team that the pandemic had impacted her ability to pay her bills.

“I used to have a lot of construction workers coming through the door but a lot of them have been laid off and are doing other things. On the whole, people who are still in work, also have to watch what they are spending”.

“I’m one of the lucky ones. For the past year and three months [my sister] has been paying my rent, current and wifi. If it wasn’t for my older sister in England, I don’t think I would have survived”.

Prior to the pandemic, Shukura and her sister Jackie who resides in England, planned to expand the upstairs of the premises and utilise social media to market the business. However, because of the pandemic, those plans have been put on hold.

Tyson, was originally born and raised in Birmingham, England, however, from a young age, always aspired to live in the place where her mother was born in the Caribbean. In 2005, Tyson made her childhood dream a reality. She said, “My heart has always been to live amongst my own people”. Then added, “I love England and what it has to offer and I don’t think without it, I would have been able to achieve what I have. But St. Kitts is my heartbeat”

Tyson said the post- COVID environment will look a lot different than the present day. She said, “The future will change, it’s not going to be like before and it’s about adapting to your environment”.

Tyson raised concerns that only one sector of the business community is able to continue to grow. She hopes to see more of an impact of the influx of cruise ship passengers, once the tourists become accessible to everyone. Tyson told WINN, “cruise ships are coming, however, even local businesses based in Port Zante have been unable to benefit from the passengers coming in because they are being picked up at the gates and taken away for tours, then they are being brought back and left at the gate again. So the majority of businesses in St. Kitts are not benefitting from the cruise ships”.