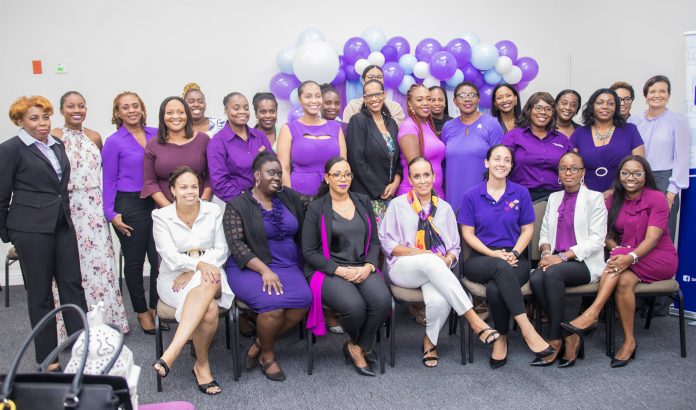 (Press Release) On Wednesday, 6th April 2022, Women empowering Girls (WeG) partnered with The Chamber of Industry and Commerce (CIC), its platinum sponsor, in recognition and celebration of International Women’s Month (March 2022) to conduct a speed mentorship program with 24 female students from CFBC.

The idea behind the session was to connect female students dubbed ‘queenagers’ with ‘(wo)mentors’, linking present with future trailblazers using the ‘speed dating’ format. Each student got the opportunity to interact with women who have excelled in their respective business or profession in Saint Kitts. The mentors used in this session comprised of women who are personally or through their organisations registered with the Chamber and women from sectors the Chamber intends to capture. The (wo)mentors included women from media, music, events planning, restaurateurs, photographers, cosmetology, agro-processing, cleaning services, education and linguistics, as well as women who are managing hotels, banks, law firms, telecommunications companies. Also present were owners of small and medium-sized businesses, managers and directors of large corporations. At this session, WeG matched the queenagers with their future bosses to discuss pressing topics like scholarships, career paths, body positivity, mental health, work/family life balance and receive general advice on how to break the bias against women and girls. Indeed, the mentorship program breaks the bias that powerful women cannot work together.

The program included a discussion on the critical topic of ‘imposter syndrome’ by Naeema Hazelle, psychologist and president of CWIL.

The interaction provides an opportunity for girls to build a lifeline. It also encourages networking amongst the (wo)mentors. The speed mentorship program is the brainchild of Senator Dr. Joyelle Clarke, Youth Officer Kristen Hendrickson and Attorney at Law Angelina Gracy Sookoo-Bobb. WeG’s mission is to inspire and empower the next generation of females by bridging the gap between the present group of dynamic women with the next generation of trailblazers. The project also serves to recognise the contribution women are currently making to the corporate world and provide an avenue for these women to impart their knowledge and experience. The project was launched at Cayon High School on 7th March 2022. Dr Clarke is both the glue and driving force of the speed mentorship project and WeG. The goal of WeG is to host the program throughout the Federation and the broader region. Women from the diaspora will also be engaged in future sessions via ITC. WeG extends an open invitation to all women interested in becoming a (wo)mentor, especially women in nontraditional businesses and professions.

Outgoing president Giselle Matthews of CIC, who was also the first female president of CIC, brought greetings on behalf of the Chamber. She pointed out that women have always featured prominently at the Chamber, even though she was the first female to reach to the highest position of president. Ms. Matthews boasted that the current constitution of CIC’s board of directors is representative of CIC’s commitment to gender parity. She also noted that women, regardless of their economic backgrounds, all face the challenge of working twice as hard as their male counterparts to prove their worth in the corporate space.

Senator Dr. Clarke has advised that the intention behind the program is to include in each session, women who are in traditionally male-dominated fields and those in the creative spaces. In selecting (wo)mentors, we try to have the women from areas they queenagers are interested in while balancing this with women who are not formally educated but excelling in their respective fields. We recognise and want to communicate that success does not have a one-size-fits-all look but varies. At WeG want to ensure that this variety is included and communicated to our young girls. That’s why we always reach out to and feature women making waves in the entertainment, creative and cosmology spaces. We are excited to feature in the future women in construction, female surveyors and architectures. At the end of the session with the CFBC’s students, the (wo)mentors signed an affirmation board and gave each student a book on self-improvement with a personalized handwritten note on the cover. In turn, the girls gave each mentor a token of appreciation in the form of custom girl power coffee mugs.

The team at WeG wishes to thank its platinum sponsor, CIC and the Ministry of Youth for supporting this initiative. WeG intends to host a speed mentorship event at each High School in the Federation in 2022 and looks forward to partnering with other NGOs, businesses and interested individuals on this initiative.