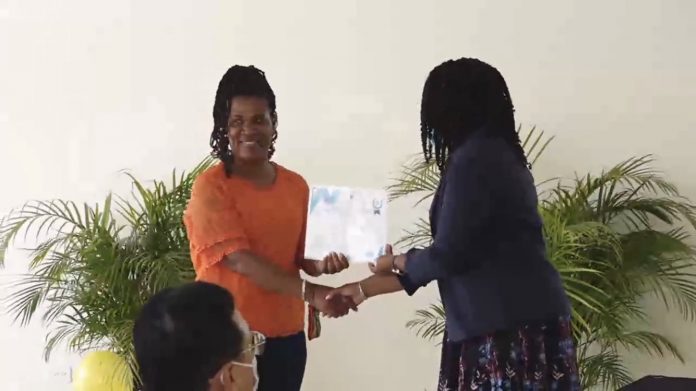 St Kitts and Nevis (WINN): Women who participated in the Department of Gender Affairs workshops have earned additional skills to prepare them for the future. They were taught how to transform business ideas into income earning ventures, turning their skills and learning into profitable businesses.

To reward their efforts the women gathered and were awarded at the Gender Expo, under the theme “Inspire, Empower, Retool, Connect for a Sustainable Tomorrow” held at the Malcolm Guishard Recreational Park on Friday afternoon (March 18).

In a brief ceremony, Mr. Mario Phillip, Gender Affairs Officer and moderator of the event provided a brief synopsis of the initiative.

“In 2020 the COVID-19 Pandemic came to the shores of our wonderful paradise called Nevis. That was a tough time and many of us might have wondered what good could ever come from something like that; but indeed the Ministry of Health and Gender Affairs knowing that tough times call for adaptation and innovation so that tough people could last, decided to tool the people of Nevis and in particular, our women who would have suffered most from the near closure of our Tourism Industry.”

According to Mr. Phillip, the Department of Gender Affairs organised workshops in the areas of hat making, basket weaving, fruit carving, sewing and fish pot making. He said booth camps were also organised along with the workshops.

The Gender Affairs Officer recalled the words of former US President John F Kennedy who said, he would go to the moon and do the other thing, not because it is easy but because it is hard. Philip, therefore, lauded the women for braving the Pandemic to equip themselves with the various skills during these tough times.

Assistant Permanent Secretary in the Ministry of Gender Affairs, Ms Latoya Jeffers delivered remarks on behalf of the Hon. Hazel Brandy Williams, Minister with responsibility for Health and Gender Affairs.

Ms. Jeffers highlighted the various ways in which women were affected during the pandemic and the importance of gender equality.

“The Ministry and Department of Gender Affairs have always had a focus on equality for both men and women, but from the onset of the Pandemic in 2019, it became even more apparent that present day inequalities have far reaching effects; the stability and sustainability of our future society.”

Jeffers added, “The Pandemic brought with it more than physical ailment, which in some extreme cases resulted in even death. It also brought a near halt to the largest industry of our Federation, Tourism. This brought us an even more peculiar problem, as women make up the large majority of workers in the Tourism Service Sector, add to this equation, the fact that in St. Kitts and Nevis, over 50 percent of households are female headed, single parent households and you can immediately understand that not only were many women were left without work, but many households were left without an income.”

The Department of Gender Affairs – Nevis, therefore embarked on an even more robust mission to empower women to diversify their skills and help create business owners who can adapt in times of uncertainty, Jeffers explained.

The participants of the various workshops were presented certificates of achievement as they now embark on their own journey as professionals in their respective fields.