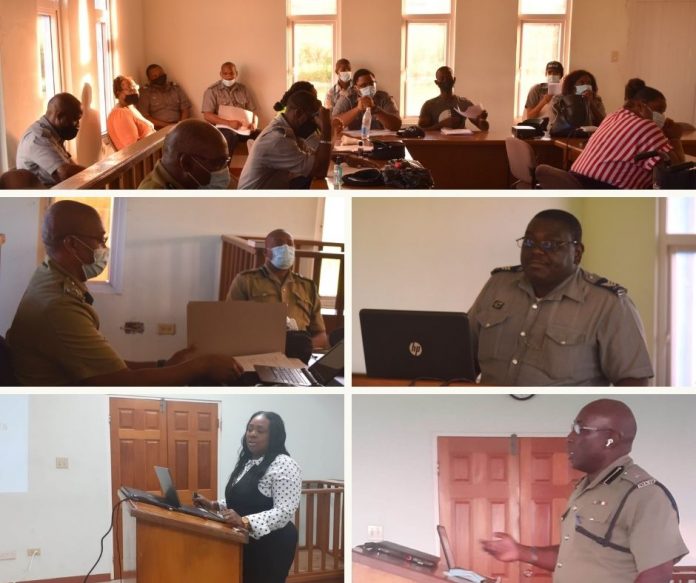 Basseterre, St. Kitts, November 18, 2021 (RSCNPF): Police Officers in Division ‘B’ are sharpening their investigative skills at a Traffic Accident Investigation Workshop that got underway this week at the Dieppe Bay Police Station.

The Workshop, which began on Monday, November 15, 2021, is scheduled to run until December 16. Sessions will be held on Mondays and Thursdays weekly for three (3) hours each. The exercise is part of the division’s ongoing professional development programme for Police Officers.

At a brief opening ceremony to officially begin the workshop, Divisional Commander for District ‘B’, Superintendent Lyndon David, stressed the importance of such an exercise. Superintendent David had previously expressed his concern with the number of traffic accidents occurring in the district. He encouraged the Officers to pay keen attention to the presentations, adding that they only stood to gain from the information that would be shared.

Inspector Eldrin Dickenson also spoke at the opening. He explained that the training would build the capacity and competence of the Officers to analyse and draw conclusions about the causes of traffic accidents. “The overall goal,” Inspector Dickenson said, “is to increase the Officer’s ability to…proficiently present evidence in court after completing a traffic accident investigation.”

According to one of the main facilitators, Sergeant Matthew McGuire, the key objectives of the exercise are to increase general knowledge and confidence, as well as, enhance investigative skills, practical ability, communication skills and to improve overall performance.

The first sessions on Monday focused on the definition and causes of collisions, classification of tyre marks, and determining points of impact. Those sessions were facilitated by Sergeant McGuire. Superintendent Cromwell Henry presented on aspects of the Traffic Act, and the Director of the Forensic Services Department, La Toya Lake-Marshall, presented on the role of forensic science in accident investigations.