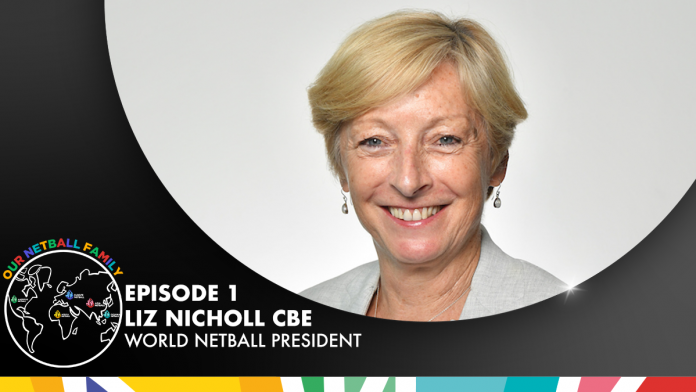 (Press release) In the first episode of World Netball’s new official podcast “Our Netball Family”, World Netball President Liz Nicholl CBE looks forward to the Commonwealth Games and gives advice to the next generation of leaders.

Liz was elected as World Netball President at the federation’s Congress held at the Netball World Cup 2019 in Liverpool. Liz played netball internationally for Wales, and during her exceptional career has been CEO of England Netball and CEO of UK Sport.

In her chat with World Netball Digital Marketing Executive, Sophie Reynolds, Liz spoke about her journey in netball from a player to an administrator, her leadership qualities and role at World Netball.  She shares her aspirations for the future of netball, as well as her advice to those wanting to get involved in sports administration and governance.

Looking ahead to the Birmingham 2022 Commonwealth Games, starting on the 28th July, Liz said: “I will be at the netball venue from the beginning to the end.

“There are also, at times like this, other public bodies that want to meet with World Netball from other nations; maybe they are interested in bidding for future events, and so we will have a number of meetings with ministers, and we will be encouraging them to continue to support our netball colleagues.”

However, aside from this, what Liz is most excited about is meeting lots of the Netball Family, she added: “Spending time with our Netball Family that will be there will be invaluable.

“That is what I am most looking forward to, of course beyond the play that is on the court.”

The aim of the “Our Netball Family” podcast is to inspire the next generation of players, administrators, officials, coaches, fans, and volunteers by bringing to life the different roles that those within our Netball Family play.

When asked what advice she would give those wanting to get involved in sports administration and governance, Liz said: “If you have an interest at all in getting involved in the governance side, taking on some leadership opportunities or sharing committee responsibilities, I would say don’t hold yourself back, go for things beyond your reach because you will surprise yourself.

“There have been so many points in my career where it would’ve been easy for me to hold myself back, and not go for things but every time I surprised myself.

“The other thing I say is if someone you respect says you can do it, you probably can; so listen to those voices of encouragement.

“In my career I have had a number of little voices, the very first voice I had that made me think ‘I have got to listen out for those’ was when I was moving from school to university, a PE teacher from another school said to me, “don’t lose touch with Welsh Netball”, that is all she said. I was going off to Nottingham and I thought do you know I think she thinks I could play for Wales one day and so I listened to it and I went to trials and I did (play for Wales).”

If you enjoy listening, please leave a review and rating, and follow us so that you don’t miss an episode.