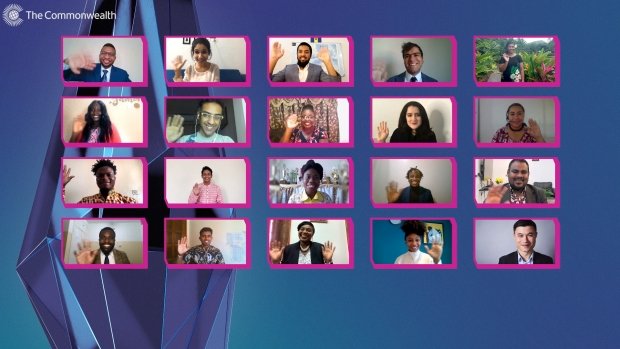 The awards recognise the contributions of young people whose projects are transforming lives in their communities and helping achieve the Sustainable Development Goals (SDGs).

The five regional award winners are:

Europe and Canada: Siena Castellon, United Kingdom, for convincing schools to change how they perceive autistic students (focus on SDG 4: Quality Education); and

Pacific: Maselina Iuta, Samoa, for advocating for the rights and opportunities of people with hearing-impairments (focus on SDG 3: Good Health and Well-being).

The winners were chosen from more than 1,000 entries received from 43 Commonwealth countries following a rigorous judging process. Each regional winner will receive £3,000 for their projects.

In addition to winning the regional award for Asia, Faysal from Bangladesh won the overall title of 2021 Commonwealth Young Person of the Year for his work and received a total of £5,000.

Sharing the motivation behind his project, he remembered his best friend who had a road accident but died due to the unavailability of an ambulance. His project, which offers low-cost ambulances and medical care, has served more than 1,000 people.

Dedicating the award to his parents, Faysal said: “I am extremely honoured to receive this award. This recognition will help my project grow even more and serve more people.”

Jeremiah from Sierra Leone set up a company that harnesses solar energy to create clean and affordable energy for local communities. His company has powered more than 150 households and 15 schools, and has reached 10,000 people in his country.

He dedicated his award to single mothers and people living with energy poverty. Jeremiah said: “They have no option but to use wood for energy. I stand with them and I look forward to how we can collectively address this issue.”

Grenada’s Bevon started an organisation which builds self-sustainable farms across the Caribbean. The farms are currently spread over 100 acres and provide fresh vegetables and fruits to in-person and online customers.

In her acceptance speech, she said: “It is an honour to be selected among the brilliant youth leaders from across the Commonwealth.

“We have a substantial amount of food being imported to Grenada, which could be produced locally. It is one of our missions to reduce our national import dependence while creating sustainable farms throughout the region.”

Siena from the United Kingdom is the founder of ‘Neurodiversity Celebration Week’, which influences schools and colleges to change the way they perceive students with autism and learning differences. Her initiative has reached about 850 schools and a half million students across the world.

“Winning this award would benefit the 680,000 students taking part in ‘Neurodiversity Celebration Week’ across the world,” Siena said.

Samoa’s Maselina is a founding member of an association which advocates for inclusive opportunities, policies and legislation for people with hearing impairments. Her efforts have helped include sign language and deaf interpretation in the national health programming in Samoa.

In her acceptance message, Maselina signed: “My work with the association is focused on deaf-led initiatives to ensure deaf people can achieve full and worldwide participation in all aspects of society. This award will assist us in raising [that] awareness.”

Addressing the virtual ceremony, Commonwealth Secretary-General Patricia Scotland said: “With 60 percent of the combined population of the Commonwealth under the age of 30, these awards are a vitally important expression of our collective commitment to young people.

“This means investing in you and with you, so that there are ample opportunities for you to empower yourselves and to engage more widely to bring change at all levels.

She continued: “Those being honoured with awards today show us what it is possible to achieve… Even in times of restriction and isolation we, as a Commonwealth family, can support each other and mobilise for dynamic change and progress.”

This year, ten young people from ten countries were also recognised as ‘COVID-19 Heroes’ for their efforts in addressing the challenges posed by the pandemic in their communities.

For nearly two decades, the awards have brought the innovative, scalable and replicable projects of young people to the forefront of global leadership and have kicked local projects into the international arena.