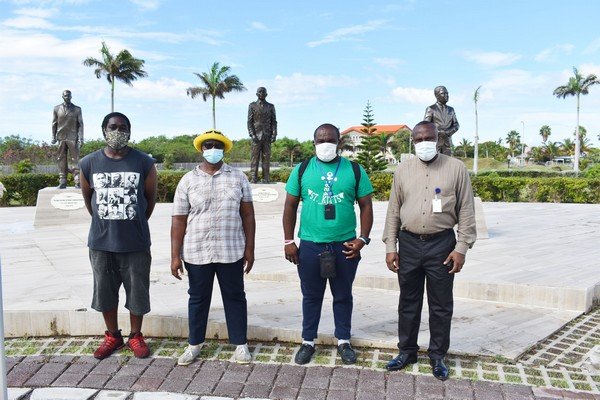 The Skills Training Empowerment Programme (STEP), through its Community Enhancement Groups has ensured that the park is in its best shape as it hosts the National Heroes’ Day activities. According to the STEP Field Operations Manager, Mr William Phillip, the community enhancement groups, which were recently put into four zones, have done a tremendous job in a very short time.

“When our people come to the National Heroes’ Park they will see for themselves the work that has been done by our community enhancement groups in Zone One,” said Mr Phillip.

He explained that Zone One, which is led by STEP Zonal Field Officer Mr Cleavon Huggins, covers the areas from West Farm to Bird Rock, including St. Peter’s. While there were eleven community enhancement groups scattered in the area mentioned, with the zoning they have now been compressed into three larger teams.

According to Mr Huggins, Team One which did the work at Heroes’ Park is now going under the name New Keys Team. It was formerly comprised of community enhancement groups covering Conaree, Keys, Needsmust, Bird Rock, Newtown, and Heroes Park.

Team One is the largest of the three teams in Zone One, and its Supervisor Mr Earle Dexter O’Garro praised the efforts that have been put in by the combined groups noting that they now have more tools at their disposal, and a result they do more work in less time. Assistant Supervisor is Ms Sophia Charles.

It was however found out that persons on the community groups would be from the community itself and were not willing to move out of their community to work elsewhere. This disadvantaged the STEP, as when persons completed their task in the village, they would have nothing else to do and would just hang around for the rest of the day.

St. Kitts was as a result divided into four zones, and having recently visited Zone Two which covers the areas Boyd’s, Challengers, Old Road, Sandy Point, going down to Newton Ground and into St. Paul’s, Mr Phillip was appreciative of the great improvement in productivity and quality of work by the combined community enhancement groups.

“As the same results we have got from Zone Two, more productivity because they are grouped together, we now have more availability of the equipment and such like so we can do much more, which results in greater efficiency,” said Mr Phillip. “Based on what we have seen at the Heroes’ Park, Zone One is performing well and as a result of that, we can say that STEP is serving the nation well.”

Mr Phillip, accompanied by Mr Huggins visited the West Basseterre Team, which is under the supervision of Mr Shawn David, as they worked and cleared bushes along the discarded former sugar train tracks in LaGuerite Village.