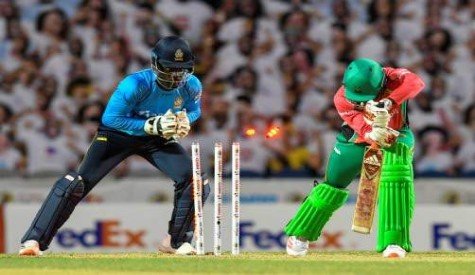 In doing so they booked their place against the Trinbago Knight Riders in Thursday’s final, the first in the St Lucia franchise’s history.

Zouks Captain Daren Sammy put the Amazon Warriors in, but even he could not have seen this coming. Brandon King toe-ended to keeper Andre Fletcher and Shimron Hetmyer inexplicably left his first ball to let it crash into off-stump. Nicholas Pooran denied Scott Kuggeleijn a hat-trick, but only a single and a wide followed, and Mohammad Nabi followed up with a maiden to leave the Amazon Warriors 2-2 after two overs.

Pooran immediately counter-attacked, slashing Kuggeleijn over the slips then dismissively driving him down the ground for back-to-back fours, but he fell trying to loft Nabi down the ground thanks to a wonderful catch by Mark Deyal diving forward from long-off. Chandrapaul Hemraj and Ross Taylor cautiously played out the rest of the Powerplay, at which point the Amazon Warriors were 21-3.

Taylor fell lbw essaying his favoured sweep off Roston Chase as the Warriors reached the halfway mark at 42-5.